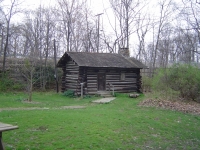 The Cahoon Log Cabin in the valley behind Rose Hill was built by scouts as part of the 1976 U.S. Bicentennial campaign.

It was the year 1976. Our country was 200 years old, and Bay Village planned on participating in the celebration. Mayor Henry Reese formed a committee of citizens he named the Bicentennial Heritage Committee to help plan events for the city. I was a member. The goal was to meet the criteria set by the Washington, D.C. Bicentennial Administration and become a bicentennial city by planning year-round events for the village.

The committee came up with a list of suggestions to meet the federal criteria. Clubs, schools, churches and organizations met to pick a project that needed to be addressed. An area in Cahoon Memorial Park was mapped out to be designated as a historical site by the city. The boy scouts chose to build a replica of the Cahoon family's log cabin in the valley behind Rose Hill.

John Brandt, scout master, was in charge of the construction, teaching the boy scouts and girl scouts how to build a log cabin as they did in 1810. The following, in John's words (shortened a little), is his story.

This project got started in 1975 when the USA was getting ready to celebrate its 200th anniversary in 1976. Bay Village Mayor Henry Reese established a commission to plan for the “American Revolution Bicentennial” events. A meeting was held of all the civic organizations to give each a chance to choose from a suggested list of projects to work on.

The boy scouts chose to build the Cahoon Log Cabin in the “Heritage Valley” just east of Rose Hill. The cabin was to become part of the Rose Hill complex and be shown by the Bay Village Historical Society along with the museum.

Plans for an 1810 cabin were drawn by Mr. James Sondles, architect, a Bay Village resident and father of several of the scouts in Troop 235. The commission approved the drawings and determined that the cabin should be located in the middle of the "lily pond" in the valley. The pond was put in by the WPA during the 1935-era depression, thus was not to be saved as part of an 1810 scene.

The plans called for a stone foundation about three feet high to get the basin up to grade. Under the cabin floor is a crawl space which should keep the cabin dry from ground water. Also, there is a drain in a trough completely around the cabin connected to a pipe through the dike to the creek.

This cabin is of similar size as the Cahoon cabin.  The contents of this cabin are similar to the 1810 period. No doubt the Cahoons had a loft in their cabin in order to accommodate the large family. The Bay Historical Society furnished this cabin with actual antiques.

Some 171 years later, this cabin was dedicated to the memory of the Cahoon family. It completed the project that the boy scouts took on as their bicentennial commitment. They do not camp here. They just built it and they built it with hand tools only.

This massive construction took much more time than originally anticipated – from 1975 to 1981. The actual work on the site was started in February 1976 and continued until September 1981. It took 220 boy scouts and 33 girl scouts working 3,000 hours, as well as 24 men working 900 hours at the site. Besides working on the cabin, some of the girl scouts made the beautiful quilt that is on the Foote family bed. In the six years, 180 Saturdays had someone on the site working. There are 312 Saturdays in six years; the ones missed were due to bad weather and the terrible snows of 1978-79. The lily pond filled up each year with water, and the city helped that problem by pushing out the dike to the south.

There are 62 tons of masonry in the foundation and huge chimney. The stone came from the lower tier of the retaining wall to the north and the remaining from the Cahoon Creek.

The Cleveland Electric Illuminating Co. furnished 74 power poles which were used for the "logs." They are 30 feet long, 12 inches in diameter and weigh 700-900 pounds each. They proved a challenge to chop and saw.

The cabin was built entirely using hand tools, typical of 1810. The scouts learned all about how to use the axe, two-man crosscut and one-man crosscut saws, levers, inclines, rope, block and tackle, team work, hard work, splinters and a rewarding feeling of accomplishment and pride. The scouts come back with their families to this day and point out the parts they helped to construct.

Nobody was injured except maybe a few splinters and band-aid nicks. The city service department furnished the cement, gravel, drain tubing, fasteners and encouragement. It was the kind of project you were glad you did but didn’t want to do again.

By the way, Bay Village was designated as a Bicentennial City by meeting all the criteria set in the application. The cabin is still open. This summer there will be boy scouts and girl scouts as greeters on some of the Sundays should you visit.