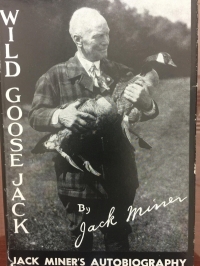 Part one in a series on Westlake native Jack Miner.

A book that caught my eye was an autobiography of one of Westlake’s most famous native sons, Jack Miner. It was inscribed to Roger and Lollie by Jack’s descendant Kirk Miner. The Cooley and the Miner families have an association that goes back to around the time that Jack was born in Dover Township in 1865.

Jack Miner was an eminent naturalist, conservationist and humanitarian who in 1904 established a bird sanctuary on the north shore of Lake Erie at Kingsville, Ontario, Canada. In his autobiography, “Wild Goose Jack: His Life and Religion,” Miner describes the house he was born in as “a little, weather-beaten, leaky-roofed house that belonged to Mr. John M. Cooley.”

This home was the first of five different homes which the young Miner family from Leicestershire, England, had occupied before moving to Canada in 1878. Mr. Preslar wonders if this home was the first house occupied by Asher Cooley (John McCrea’s father) before he built the home (that still stands) at 2871 Dover Center Road (and known today as the Asher Cooley House, c. 1828)?

It was most certainly the c. 1828 Asher Cooley house that figures in this story told by Jack Miner in his autobiography.

“How plainly I can see Mr. John M. Cooley as he came along the road one spring morning, with his high-spirited team of horses dragging a plow; how he pulled up on the tight lines and, keeping one eye on the horses that were dancing to go, as he glanced, quartering at me, said, ‘Hello, Jackie! Say, you go back to my house and tell Mrs. Cooley I will be up sharp at twelve for dinner.’ ‘Yes, sir, Mr. Cooley, I will,’ was my reply. I was soon there and rapped on the door, which was opened almost immediately, and Mrs. Cooley said, ‘Good morning, son; come in.’ I remember quite distinctly that she paid little attention to the words of my errand; but in a minute she had a saucer full of maple syrup and two warm biscuits on the table before me. She told me to ‘help myself,’ which she did not have to repeat.”

Jack Miner also recounted that “Mr. Cooley was only one of the lovable men who were, mysteriously, kind to brother Ted and me, who let us through the fairgrounds gate free [the Cuyahoga County fairgrounds were on the site of the current Lee Burneson Middle School through at least the 1870s] when other boys had to pay, who dropped two bright coppers on the stone door-stop of the town’s general store so I would be sure to find them.”

While Jack wrote very fondly of both of his parents, he was a staunch temperance advocate throughout his life and recounts that his father had a problem with alcohol and one of the reasons the family moved to Canada was to escape the taverns in Dover.

Before emigrating to Canada Jack’s father operated a brickyard and according to the 1874 minutes of the Dover Board of Education he was given the contract to supply the bricks for the one and only school Jack Miner ever attended (for a grand total of three months in 1878). That school building still stands, in altered form, as the southern part of the Jenkins funeral home at 2914 Dover Center Road.

By 11 years old Jack was doing a grown man’s job in his father’s brickyard working beside a simple machine that molded bricks from clay. When he was an adult he donated that same machine to his good friend Henry Ford for his Greenfield Village collection.

In “Wild Goose Jack,” Miner writes that it was Dover Ditch and Cahoon Creek which were where he played and began educating himself in the things that would later make him world famous. He loved Dover as his home town until he died in 1944.