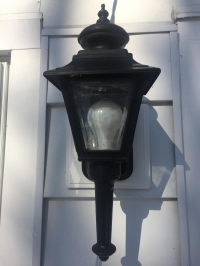 This residential carriage-type fixture has an exposed bulb which is fine when the replacement bulb is 800 lumens with a warm color temperature of 2700K. A brighter, bluer light may annoy your neighbors and drivers. Photo by Will Krause

Advances in lighting technology have dramatically changed how we illuminate our homes, businesses and streets. LEDs are extremely energy efficient and consume up to 90 percent less power than incandescent bulbs. Since they use only a fraction of the energy of an incandescent light bulb there is a dramatic decrease in energy costs. This new technology has made the regulation of lighting more complex and challenging.

To confront the issues wrought by LEDs, the City of Westlake adopted a new lighting ordinance in 2018 for commercial exterior lighting – including apartment and townhouse complexes, churches and other institutions in residential districts; and retail, office and all other commercial properties. Lighting contractors were put on notice a year ago about the requirements of the new lighting code.

One purpose of this article is for the smaller commercial property owners to understand that they must comply with the new ordinance as they change their lighting to capture the cost savings of the new technology. They will most likely require professional help to choose new exterior lighting equipment that will comply with the new code.

Another issue is the color of the light emitted, which is called the “color temperature” (CT), measured in units called Degrees Kelvin (K). Before electric light, we burned wood and candles at night – this light has a CT of about 1800K, quite yellow/red and almost no blue. Incandescent bulbs have a color temperature of about 2400K which has a “warm” glow similar to a fire. LEDs are commonly available with a CT of 2700K to 5000K with 5000K being a very blue light.

Because some LED light is concentrated with a high blue content, it can cause severe glare, causing a viewer’s pupils to constrict. This can cause problems seeing clearly for safe driving or walking at night. Glare is defined in the new ordinance as: “The sensation produced by luminance within a visual field that is sufficiently greater than the luminance to which the eyes are adapted, causing annoyance, discomfort, or loss of vision or visual performance.”

This is easily observed at night when one is confronted with some of the new LED auto headlights that have a bluish cast coming toward you which are so bright that one is forced to look away. The same phenomena occurs when one is inside a brightly lit house at night and one looks out the window and only sees blackness. If one turns out the lights inside as ones pupils expand, one can gradually make out what is visible in the yard from the ambient light outside.

The zoning code for exterior lighting of single family homes has not changed – the code states that: “Floodlights … or similar structures shall not be erected or used in a residential district in any manner that will cause hazards or annoyance to the public generally or to the occupants of adjacent property.”

Hopefully, the points that have been discussed above can be used by homeowners when purchasing new exterior LED fixtures.

Where possible, choose fixtures in which the light source is hidden and is not too bright for the setting, usually no more than 800 to 1000 lumens. Also pay attention to the color temperature of the light source so that all the lights on your property have a similar warm color, preferably 3000K or less.

The lighting code can be found in the Westlake Codified Ordinances Section 1230.03 titled “Commercial Exterior Lighting” online through the city's website at www.cityofwestlake.org or by visiting www.conwaygreene.com/westlake.htm and then typing Section 1230.03 in the search box.

If you have any questions, please call the Westlake Planning Department at 440-617-4305.