The Lora A. and Russell A. Pease Home, Part 2 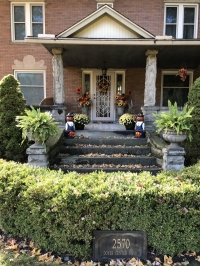 Entrance to 2570 Dover Center Road. Photo by Will Krause

The book “You’ve Come a Long Way Westlake” by William Robishaw, published by the Westlake Historical Society, has genealogical information about the Pease family in Dover. What becomes immediately apparent is that the Pease family were “movers and shakers” in the community at one time. During the years when most in the community made their living as farmers, they did not.

According to this book, Russell A. Pease was a doctor who practiced in Dover and the surrounding area. It also explains that Russell was the son of Herbert Pease and the grandson of James and Asenath Abel Pease. Asenath was a granddaughter of Lorenzo Carter, the first permanent settler of the city of Cleveland, who built a cabin on the east bank of the Cuyahoga River in 1797.

Russell’s great-grandfather was Solomon Pease. Solomon was born in 1803 and came as young man to Rockport Township (now Rocky River) from Chautauqua, New York. Solomon was a farmer, and purchased land at the present site of the Rocky River City Hall. Two of the sons of Solomon Pease, James and Calvin, established homes and businesses in Dover Township, another son named Gideon ran a grocery store on Denison Avenue in Cleveland. Solomon Pease was a distant cousin of Seth Pease, who was an astronomer and surveyor with Moses Cleaveland, laying out Cleveland in 1796.

An 1874 map shows James and Calvin owning the northeast corner of Center Ridge and Dover Center roads (where Circle K is currently located) with their general store on it (which expanded into undertaking in 1875), as well as a small, second parcel east from the southeast corner which became the site of James' future funeral home business (this land is currently part of the Rite Aid drugstore site).

“A History and Civics of Dover Village” by Hadsell and Rutherford, published by the Westlake Historical Society, states that the first telephones in Dover were operated on a three-party line constructed from Cleveland. Those who used this line were Dr. Lathrop; James Pease the undertaker; and the village store (probably still owned by Calvin Pease). The phone in the store served as the community phone.

Both James and Gideon Pease eventually had grandsons named Russell Pease living in Dover. Russell A. Pease was the doctor and first owner of 2570 Dover Center Road. Russell B. Pease operated the coal and feed supply business on the south side of the Nickel Plate railroad tracks which eventually became Landmark. For more about Russell B. read my Nov. 6, 2018, article in the Observer archives at: wbvobserver.com/read/columns/digging-dover.

Russell A.’s uncle Clifford became an undertaker, taking over James' (Clifford’s father's) funeral home business. In 1915 Clifford purchased the former Dover Center School on Dover Center Road and remodeled it to serve as a funeral home. The building still serves as a part of the Jenkins Funeral Chapel.

It is unclear why Russell A. Pease’s wife, Lora, is listed as the owner of 2570 Dover Center Road. Did malpractice lawsuits exist in the 1920s? He and Lora Augusta Ochlke married in Windsor, Ontario, in 1910. His WWI draft card has him working as a doctor in Ridgeville Township, Lorain County. He and Lora were living on Eighth Street in the city of Lorain at the time of the 1920 U.S. Census. He was a doctor for the public schools on a salary. Their 4-year-old daughter’s name is listed as Linette and they have a 17-year-old living with them (probably as a mother’s helper).

The April 1930 U.S. Census has the 40-year-old Russell A. listed as a physician in general practice. His 63-year-old father Herbert E. lives with him and Lora, along with their 14-year-old daughter Beryl L. and their 33-year-old maid. They valued 2570 Dover Center Road and surrounding land at $14,000, and they owned a radio (state of the art technology in 1930). By the end of 1930 the land had been split down to the current 0.47 acre parcel along with the house and sold to the General Transit Company which held it for six weeks until it was sold to an investor, Wilder C. Parsons, who bought much of the General Transit Company property. By 1936 Russell and Lora are divorced and Russell has remarried.

The 1940 U.S. Census lists Lora as divorced and living alone at 5862 Canterbury Road, which is a rented house across from Springvale Golf Course in North Olmsted. Russell and Lora’s daughter Beryl is married and purchases a home on Butternut Ridge in North Olmsted from Russell and his second wife Mary in 1954. Lora was living in Lakewood in 1959 when she died.

According to a WWII draft registration card, in 1942 Russell Adelbert Pease, M.D., was living at 19267 Henry Road in Fairview Village, Ohio, with Mary E. Pease. Henry Road is near Coffinberry Boulevard. His place of employment is listed as 2636 Dover Road, which was a small home converted to office use, similar and next to the existing vacant century house painted blue at 2650 Dover Center Road that was most recently the Bennett Dental offices.

Based on a Lakewood City Directory in 1953, Russell's work address is listed as a medical building at 15701 Detroit Road and his home is in North Olmsted and Mary E. is listed as his wife. The 1958 edition of the same directory lists his place of employment as 2750 Dover Center Road, which would place it next to today’s Porter Library. He must have shared with other doctors the existing mid-century modern office building, built in 1956, that has a current address of 2760 Dover Center Road. The home in North Olmsted is probably the one he sold to Beryl in 1954. He died in 1974 in Florida.

Mr. Parsons owned 2570 Dover Center Road for 14 years, then Carl and Marie Werner for 14 years, then Henry and Goldie Seldon for 11 years, and the Sheenan family for six years until the current owners purchased it in 2002. They have owned it and loved it for 17 years, longer than any previous owner.