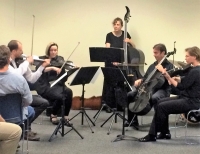 The overflow audience, which gathered at Porter Library for the program “Bass Extravaganza,” required a last-minute call for more chairs. But the outstanding performances of Ann Gilbert “and friends” riveted their audience through the mix of music from Mozart to Strayhorn, earning a spontaneous standing ovation.

With an easy, friendly manner Gilbert provided a description of three of her bass instruments that would be used in the program. They included her newest acquisition, a carbon fiber bass that uses ultra-modern materials and technology initially developed for modern aircraft and NASA. “You don’t have to worry about getting it wet and you can even use Windex on it,” Gilbert added with a smile. She also brought a traditional wood orchestral bass, a Bandini, and an electro-acoustic instrument “GELbass”by G. Edward Luthier.

Gilbert is principal bassist with the Akron Symphony Orchestra, Blue Water Chamber Orchestra and the Cleveland Pops Orchestra. She had Travis Phillips, a second-grader, open the program playing "Shortnin’ Bread."  He is a Suzuki bass student at The Cleveland Music Settlement, where Gilbert teaches.

Then, using the Italian bass, Gilbert, accompanied by Bill Marx on drums and Dan Maier on piano, raised the performance bar to its highest level and set an upbeat tempo with three selections including Lorenziti’s "Gavotte."

The saying that “When a Mozart symphony is played, the silence following upon it is also by Mozart” seems to ring true for any excellent performance of Mozart music. Before the thunder of applause began it seemed the audience caught its breath – explaining that described silence.

But this outstanding group of musicians took its audience on a multi-faceted trip which included "Take the 'A' Train" by Billy Strayhorn, "Effendi" by McCoy Tyner and when they performed "All of Me," they were joined by Rick Fortney, who did the vocals.

The performance not only sparked a standing ovation, but also left many audience members reluctant to leave without personally expressing their praise to the musicians. Thirty minutes after the program ended, many still lingered.

The May 24 program was sponsored by the Westlake-Westshore Arts Council and offered without charge to the community.